It is now the beginning of September and the polar bears are present in large numbers around the island. The largest numbers can be found on the gravel bank close to the island. The assessment of endangered species does not seem in place here. We have never seen so many bears so close together before. In some places on the gravel bank one can see up to 8 bears together. Mothers with cubs, males and juveniles mingling with each other. Seemingly, things are very peaceful. We do not see any fighting; an occasional snarl between them seems to be enough to maintain a proper hierarchy. They have all left the large polar ice field and have made the crossing to the small Barter Island, which lies close to the mainland of Alaska. 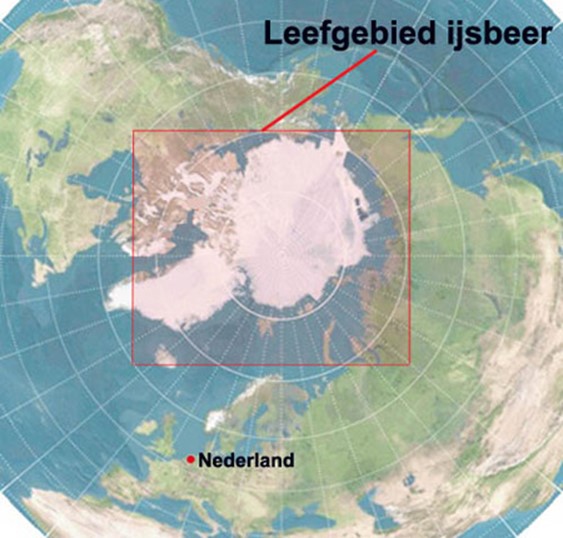 These polar bears were drawn from the main polar ice to this tiny island, because the season’s call let them know that whale hunting was going to begin. In Kaktovik, the village on Barter Island, the Inupiats are, under the treaty of the International Convention for the Regulation of Whaling (ICRW), allowed to carry out an “Aboriginal subsistence whaling” run with a maximum of three whales.

The shot whales are of vital importance for the Inupiats. The Eskimos who live on the edge of the polar ice have all obtained a whaling subsistence quota, which they can make use of annually. 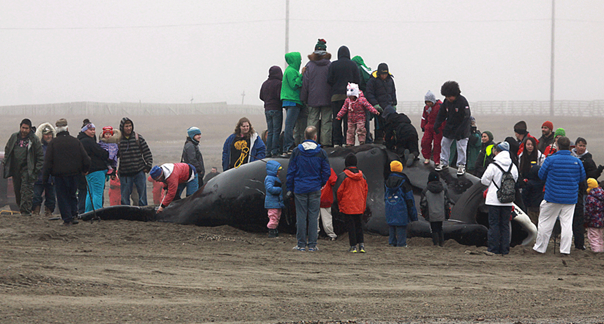 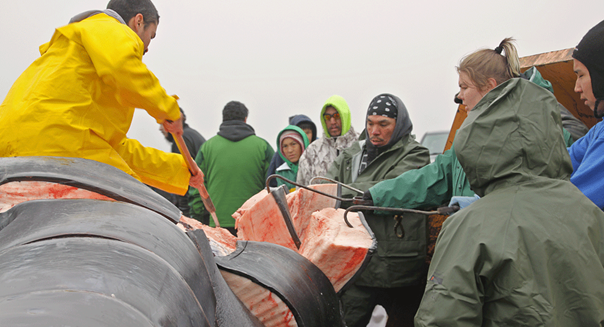 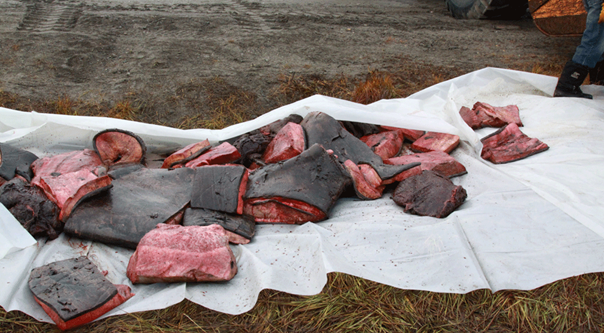 This meat will be their main food source for a large part of their food supply during the long winter period. The other sections of the whales will be used for making useful appliances.

The bones and blubber (fat), which are not useful for the Eskimos, are deposited on a bone pile, and that bone pile is now the major attraction for both gulls and polar bears. 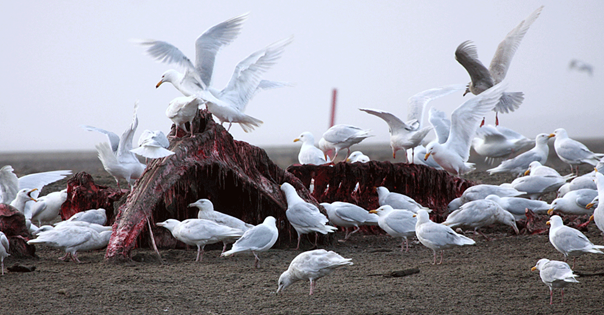 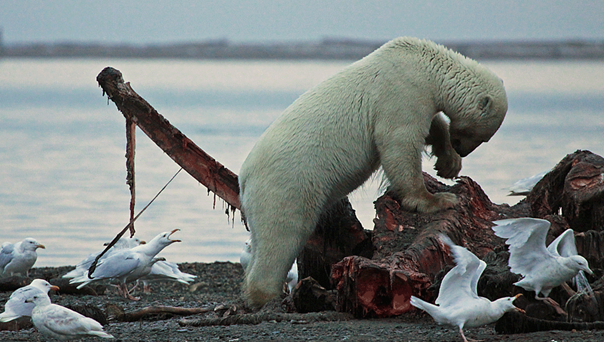 Since the ice lies further away from the coast, it becomes more difficult for the polar bears to catch seals. The summer period then means starving on the mainland or searching for food in the coastal areas. Whale remains are a welcoming supplement during or after the lean summer months. The polar bears will then have to make sensible decisions.

They take to water and swim to the coast.

If necessary, they can swim long distances continuously. The 200 miles takes a lot out of them, but they compensate this by using all their energy reserves. But they are hungry and weakened through shortage of food. The crossing can be extremely hazardous.

Once by Kaktovik the party can begin and they quickly build up their food reserves. Their feast emits a peaceful like scene, especially now that the third whale has been caught…

Sometimes they bicker. Then they discover who has the biggest mouth, and, yes, who the winner “don’t take it all” is, but who is allowed first!

Every bear seems to be going to the gravel bar (gravel bank in the sea) with an (internal) lunch pack where they will wait, before returning to the bone pile, for their next evening meal. Before they leave, they cannot resist scrimmaging with their paws on the skeleton plateau.

It seems like they want to have a tête-à-tête. 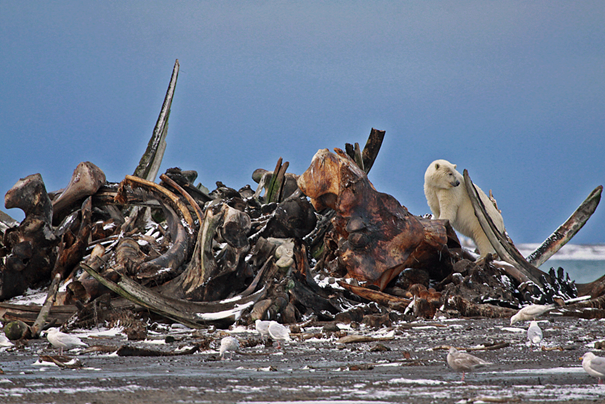 In this rough nature, the “struggle for life” is present every day. Both humans and animals are a part of this and have found their own niche in this world. Although, the world in these photos may seem to be a bit too idealistic, it is in actual fact a hard struggle that has to be valiantly borne by everyone.

Observe this mother bear with her cub. Two days ago she had two cubs. Bruce, our guide for today, told us that one of the cubs had disappeared. Apparently, killed by a starving male bear that had just completed the journey to the island. The bear grabbed the first feast that he came across on the gravel bank, and in this case it was the cub, killed and ate it.

One can see that the mother and the remaining cub have begun an endless affectionate mourning process. Their deep affection shines over the misty plains, their warmth thaws the chilly environment and their intense experience fill us with an elusive affection for this pain ridden mother and child relationship. Their mannerisms comes right from the heart.

Not being possessed with human awareness, but comparable to the experiences of our own feelings, the mother bear can sense, from her own intensive experiences, or whatever, animal instinct: the emptiness. Together with her cub and through intense contact she gives this loss a place. You don’t need a human brain for such a relationship. It’s just mother and child awareness.

We are very moved by the patience, the tenderness and the inspiring contact. Despite the fog, the humidity and the frosty cold, we become warmer within and we will imprint this scene in our hearts forever. 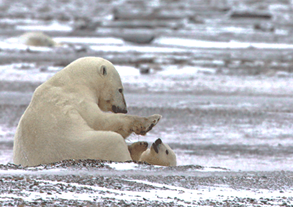 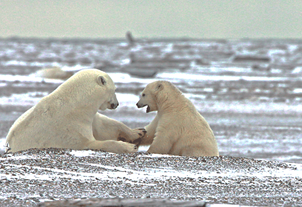 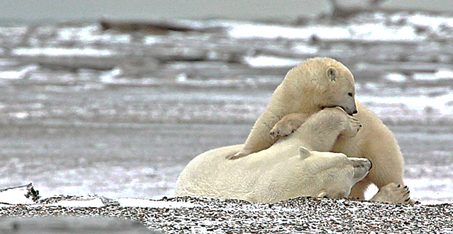 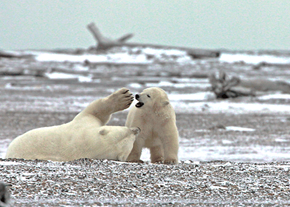 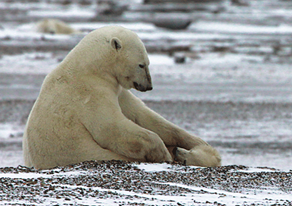 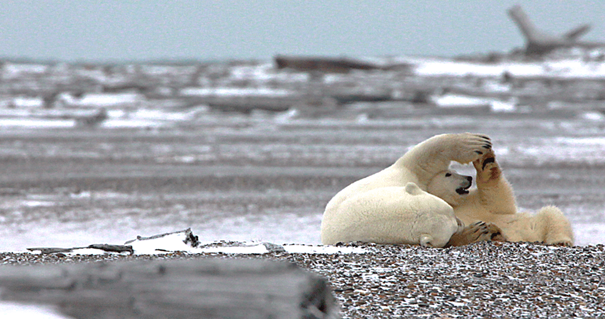 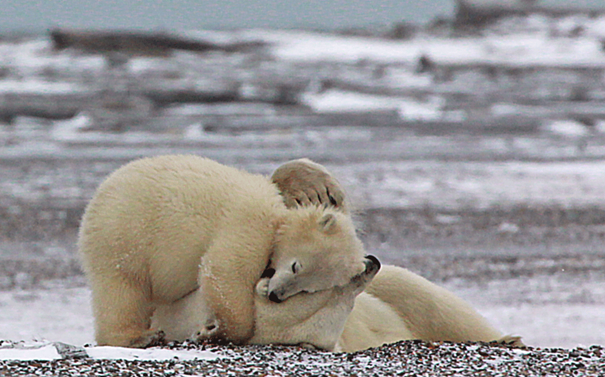 It touches us! We become very still and keep looking at it.

Yes, the polar bear is a predator, but one with a special heart.