The Dalton Highway in its winter plumage. The severe cold has the land in its grip. The ice crystals form beautiful patterns over the patches of snow free asphalt. 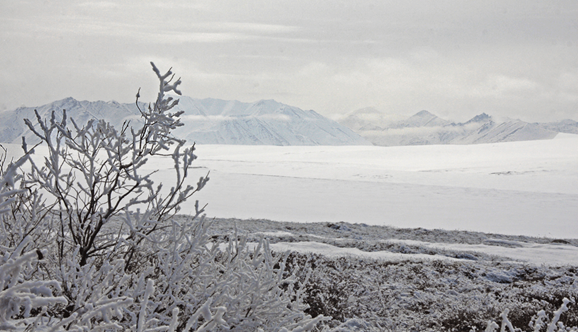 Each puny bush is engulfed with ice crystals, ensuring that the bush stands up straight. Never ending snow plains only to be broken in the middle by the grey black streak of the Dalton Highway, the only piece of accessible land that runs close to our camper. 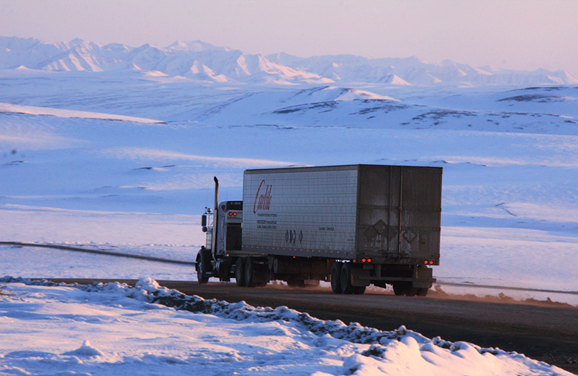 The drifting snow disperses over the road. Through the severe wind, a mixture of sand, ice and snow scatters all over the place. The isolated icy landscape demonstrates the immense desolation of this Pool region. 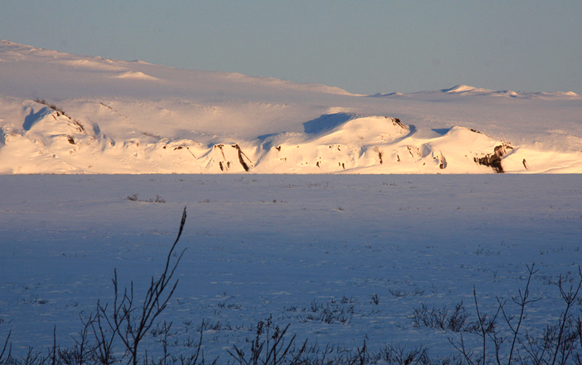 Animals live in these rough winter conditions, who, without any form of protection take mother nature in their stride.

The minus forty degrees and the severe winds give one the feeling that it is minus 50 degrees. If you throw a cup of coffee in the air it will drop down like powder. 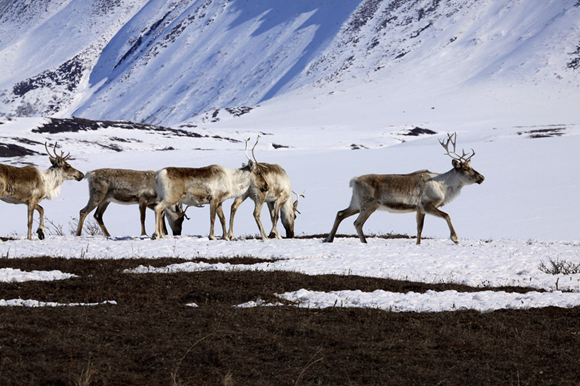 With a bit of luck you can find the caribou there, pool fox, ptarmigan, raven, goose, moose, wolf and musk ox. The ice bear still roams around along the Arctic Ocean. The grizzly bears, just like the ground squirrel, are in hibernation. 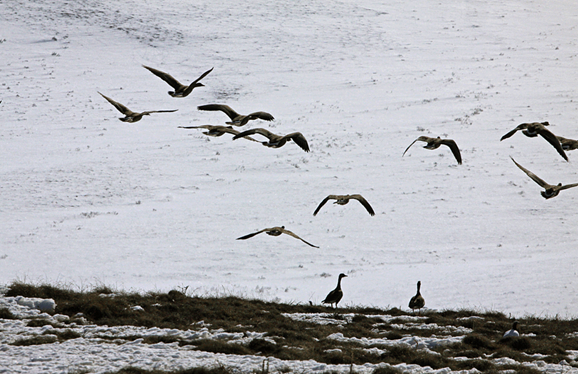 The musk ox is an unusual animal.

This type of oxen actually belongs to the sheep race. Because of their enormous head, with the heavy horns, and rough fur the musk ox is a much feared animal. They grow to approximately 1,2 to 2,5 meters shoulder height and can weigh from 250 to 600 kg. 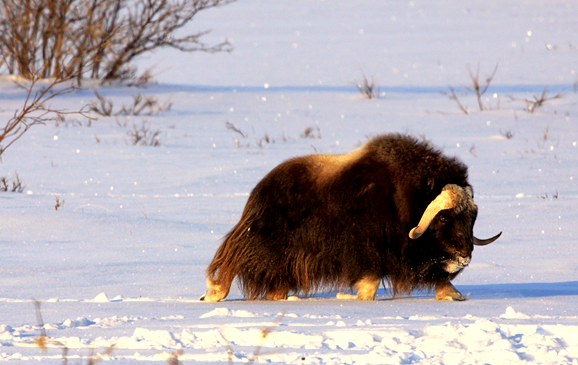 They live in groups. In the summer they spread out and the group narrows down to round ten specimens. In the winter they regroup and the herd expands to about 25. They mainly eat grass, willows, bushes and moss. They can survive well through the severe winters with their extreme temperatures, but they could never prevent being the victims of game.

Bears and wolves are their natural enemies. But man is really the biggest hunter, and responsible for their extinction in some regions. New regulations and the replacement of new herds have given the population of the musk oxen a new life in Alaska. Even though they will still remain scarce. 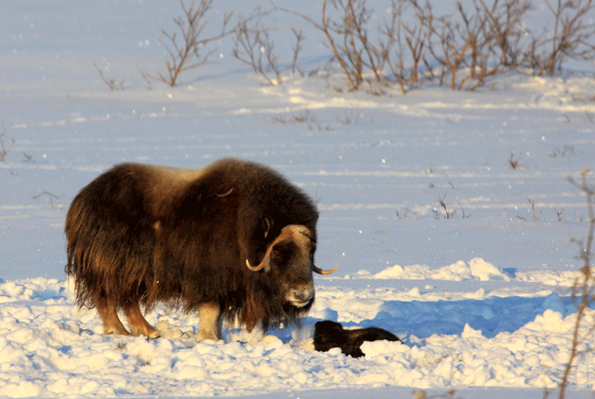 In April the females calve and the baby musk oxen are born into this world. Chubby squared little things with lush thick hair with no resemblance to a calf. They miss the defenceless baby charm because the thick fur gives them an aura of being older than they are.

At that moment, the world in which they have landed is rough and intolerable. Temperatures of less than 25 degrees Celsius are prevailing. There is a minimum of protection and the herd can easily be seen on the icy open plain. The predators are, of course, always in the area. 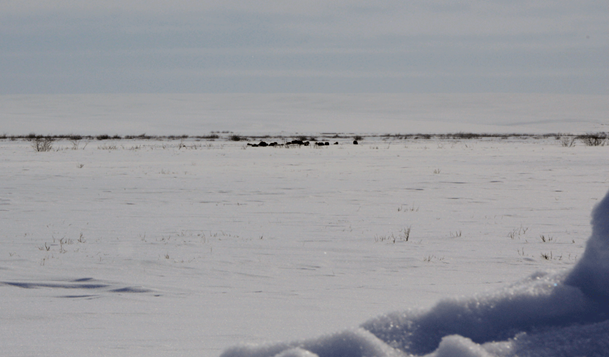 About 62 miles before the end of the Dalton Highway, so close to the Pool Sea, we spot the contours of a herd of musk oxen on the open plains. A group of about twenty animals in a circular outline situated a few hundred meters away.

Finally, this is our chance to take some shots of this rare and exceptional animal. The rays of the white plains engulf us. Wisps of drifting snow radiate across the snow crystals and cut right through our trousers. The thick down-filled jackets keep us very warm but our head and hands are extremely cold. 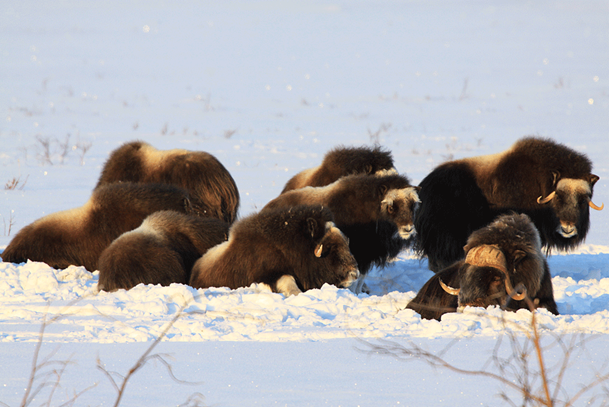 Suddenly, the sunrays briefly glide across the landscape and shine on the vague contours of the musk oxen. Some mother oxen have young. Newly born and still very small. Shuffling or lying against their mother, they can hardly been seen. 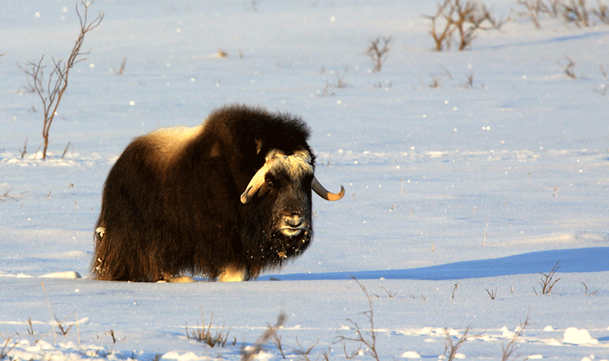 About a hundred meters away from the group we spot a young calve close by a bush. No mother, no musk ox, no real protection, nothing. The young calve is lying down and we think it is dead. Suddenly it stands up, staggers a few paces in the direction of the musk ox group and starts bleating breathlessly. 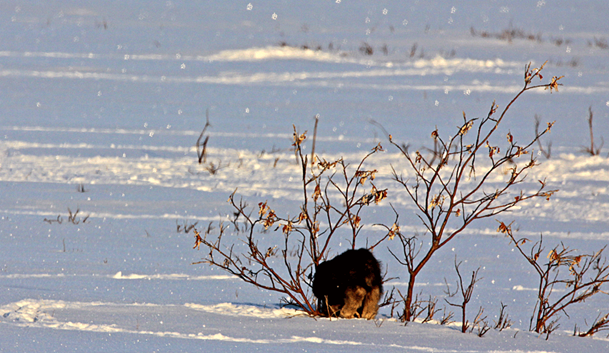 The group pays no attention to this. They are lazing in the sun, treading in the snow, playing with their young or looking in the other direction. Again, the bleating and no reaction! We look perplexed at each other. We think, it will be alright and wait until the real mother stands up and goes to her calve, says sorry and quickly brings him back to the group.

Nothing happens. An hour passes, half a day passes, and even the whole day passes without any movement. The calve lies at the foot of the bush; every now and then he stands up to once again start bleating. No reaction from the group. They are staying where they are and so is the calve. 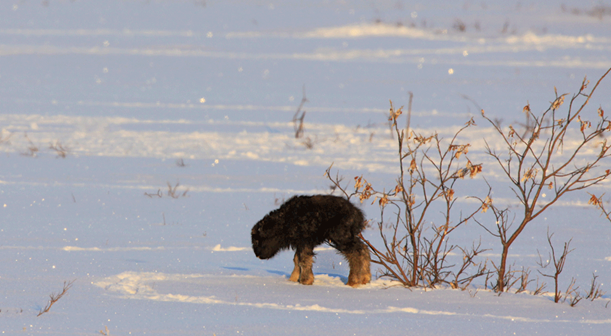 Musk oxen are complex animals, and we cannot approach the group. If we do, then there is a chance that the group will disperse and leave the young calve behind. The group is still relatively close by. We decide to camp here for the night and see what the situation is like in the morning.

It’s becoming extremely cold. We can’t seem to get warm in our camper. Every now and then we get up in the middle of the night to start the engine. By doing this we can prevent flocculation.

You can actually see this flocculation in our dish water. 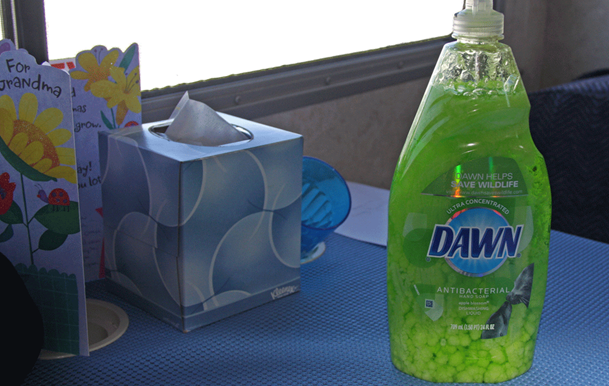 In the bleak light of the early morning we discover that the group of musk oxen is still in the same place, and the young calve is lying motionless beside the bush. He could never have survived the cold without his mother’s milk. We are overcome with sadness.

Suddenly he stands up again. Walks ten paces in the direction of the group and bleats as hard as he can, it sounds like a cry of fear.

“Come on young one, you can do it, keep walking towards the group, go find your mother or pick another mother, but do something.”

But to no avail, the calve keeps standing still, keeps bleating and after about fifteen minutes turns back in the direction of the bush. 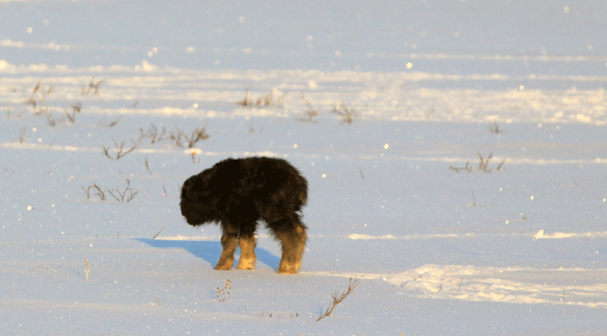 The herd stands its ground and does nothing. We look on helplessly.

A truck drives along. The truckers know us, and regularly chat with the idiots from Holland who camp in the severe cold on the Dalton Highway. 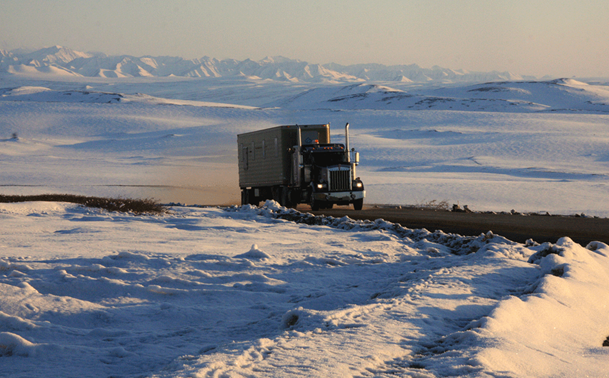 I wave and the truck stops. “Problems”, asks the chauffeur. “No, we answer back, but that calve over there, he has been there for at least a day separated from the herd. He is going to die if we don’t do something quickly. Could you phone the Wildlife organization or a pump station with your CB 19 and ask them if they could do something about this”? 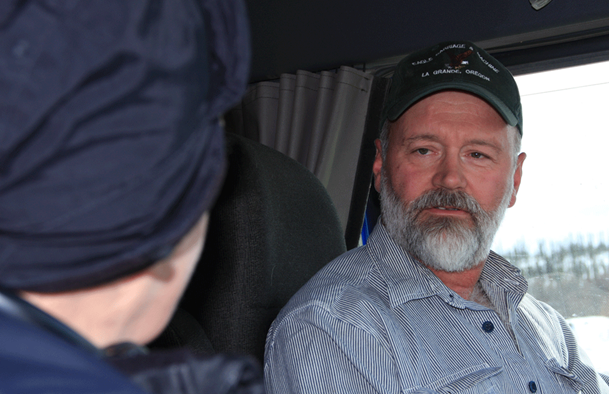 “I don’t think that they will do that. What you see now is the hard reality of nature in this temporarily intolerable landscape. You will have to learn to live with this. 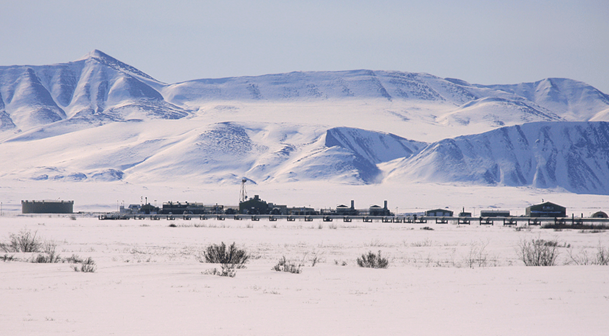 We are devastated and decide to move on. There is nothing more we can do. 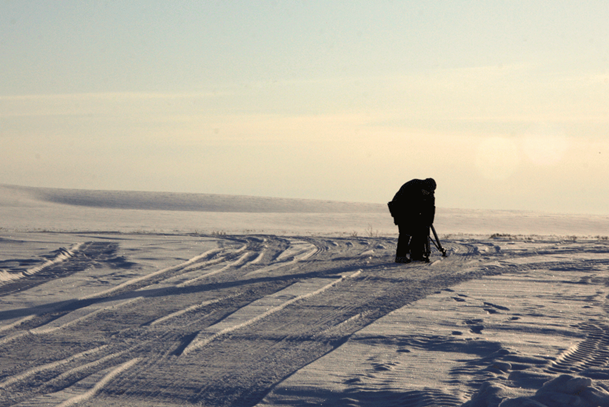 In Coldfoot, 250 miles further on, we talked to State Trooper Dan and told him about our encounter with the musk oxen and the abandoned calve.

He says it will be alright. Just at that moment he is put through to the University of Alaska Fairbanks who, together with Fish and Game and the staff of Alyeska Pipeline, are busy arranging a rescue operation. The young calve is still alive and will be taken care of. The rescue brigade is on its way.

Our story ended up in the papers in Alaska. Luckily we were able to take part in this unique rescue operation. 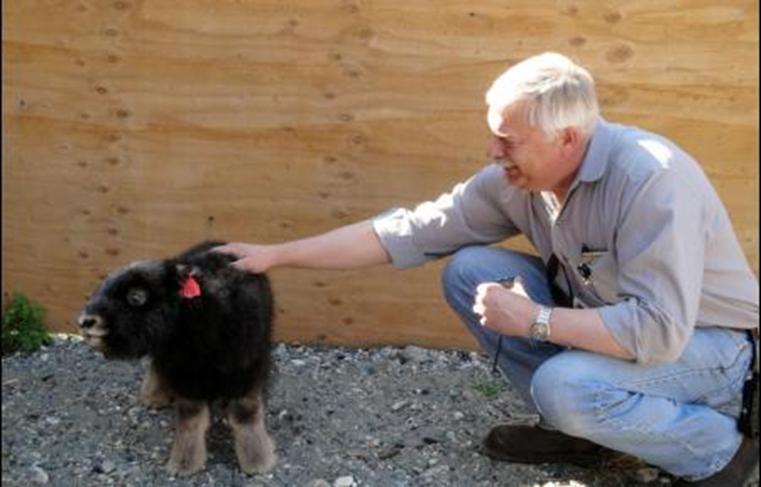 For our next Arctic trip we will have our own CB 19 with us, in case we need to make contact with others, if necessary. But for the time being we are very grateful to our chauffeurs on the Dalton Highway for their support. Even though they believe that nature has to take its course, this time they gave nature a helping hand. Eventually the sun will shine again for our “Oxie”. 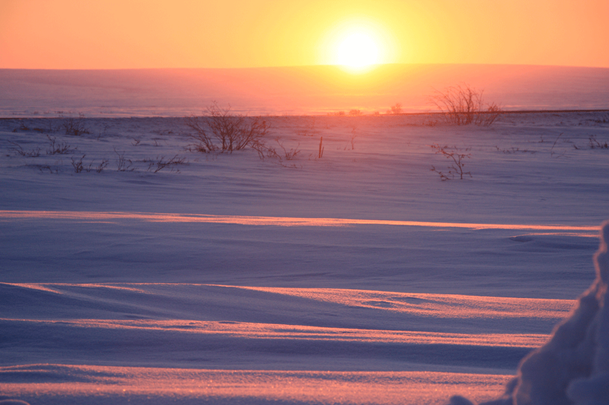 The press also wrote a detailed story on this which meant that our “Oxie” became a celebrity in Alaska. That a second calve was also found was a surprise to us. See below one of the articles in the press.

One of the female calves was rescued earlier this month by trans-Alaska oil pipeline workers and the other by a state field biologist conducting research on musk oxen populations. The calves, believed to have been born around May 9, were faltering when they were rescued but are now rebounding at the University of Alaska Fairbanks’ Large Animal Research Center.